Labradoodles are fast becoming one of the most popular dog breeds, especially with families and young children. Some people really want to get a Labradoodle, but for various reasons, don’t think that they can keep their Labradoodle in the house.

​As long as your Labradoodle has shelter, clean water and is fed regularly, then a few hours outside won’t do any harm.

Leaving a Labradoodle to live outside permanently by himself would be cruel. Labradoodles live for our attention and affection, and need our companionship to be happy.

Why can Labradoodles not live outside?

There are many reasons why Labradoodles (and most dogs) can’t live outside permanently. The main reason is that dogs in general are social animals that require regular interaction with other dogs and with humans.

As you’ve probably heard many times before, dogs are closely related to, and are the ancestors of, wolves. If you study wolf behaviour, it’s is pretty clear that their whole existence revolves around being in a pack. They hunt, feed, play and sleep as a pack and their lives depend on it.

Dogs are no different. When we give a dog a home we become their pack, and forcing them to live outside by themselves is unnatural and cruel.

Now there are exceptions to this. If you’ve got a few dogs that are for example working dogs, such as those found on a farm, then their needs change. These dogs are less family pets and more wolf like in behaviour. Their basic needs still need to be met by us, but their social needs are different.

Labradoodles are not working dogs, they were bred specifically to be family pets. This means that they do not do well living outside.

Can you ever leave your labradoodle outside?

Yes a Labradoodle will be fine outside for short periods of time. Most healthy dogs enjoy a bit of outside time away from you.

If you’ve got a garden, then they will usually spend their time sniffing around, looking for new smells. Or they will often take a nap for a few hours.

Labradoodles can be a mischievous breed, so it’s important that you’ve got your yard or garden set up properly before you leave him out there.

Here are a few tips to help keep your Labradoodle safe and sound while he’s outside without you.

What are the dangers of leaving your labradoodle outside?

Not all dogs like being outside, especially if they are by themselves. Some will bark or howl incessantly due to separation anxiety, and others will become destructive and may even try to escape. 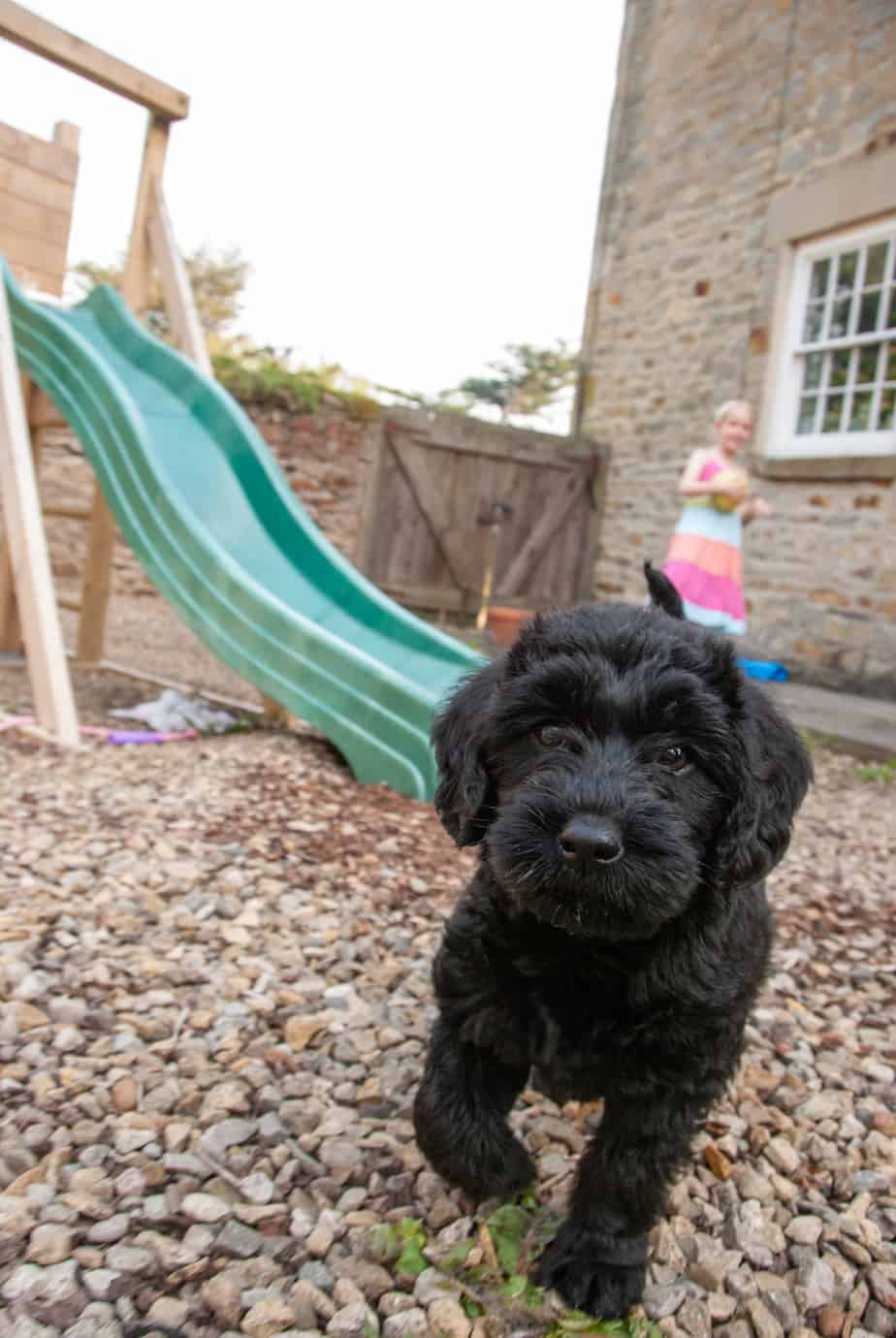 Labradoodles are smart, energetic dogs, and most will not like to be outside by themselves for long periods of time. As a result of boredom or anxiety, they may get themselves into trouble or even hurt themselves if they are left in an unsuitable environment.

Here are some things to consider before leaving your labradoodle outside:

What are the benefits of letting your Labradoodle live inside?

Most dogs, especially those that are bred to be family dogs, will do better if they are allowed to be part of the family and get to stay inside most of the time.

Labradoodles are no different. They are the perfect family pet. They are a loving, gentle social breed that are great around kids and other family pets such as cats. As such, they prefer to be indoors, surrounded by their family.

There are also lots of benefits of letting your Labradoodle live indoors. For starters, it’s generally safer for your dog to be indoors with you. Your home gives them shelter from the cold in the winter, and somewhere to cool down in the summer when you’ve got the air conditioning turned on. When they are outside, they can get up to all sorts of mischief and possibly eat things that will make them ill.

If you’ve got children, Labradoodles make a great playmate and if you want will cuddle up to you and keep you warm after the kids have gone to bed.

There are of course going to be times when you will want or need your Labradoodle to stay outside for a while. Maybe your mother-in-law is coming to visit and doesn't like dogs, or you're painting the living room walls and don't want paint paw prints everywhere!

It's a good idea then to get your Labradoodle used to being by himself for short periods of time.

You can easily teach most dogs to calmly stay outside by themselves for for short periods. If possible you should start the training when your dog is a puppy. Dogs love a routine and if you get yours into the habit of being left alone from day one, then you'll have no problem leaving him alone as he gets older.

Remember to start off slowly and be consistent. Your Labradoodle puppy is not going to be happy by himself for any length of time to begin with, so only leave him for a few minutes at a time and then be sure to come back with lots of praise and hugs.

Here are some tips for training your Labradoodle to be comfortable by himself.

1. Leave one of your old shirts in his kennel. Your old shirt will have lots of familiar and comforting smells for your puppy. This will help to comfort him when you are gone.

2. Exercise him straight after leaving him alone. Make exercise or a game with his favourite toy a reward for being alone.

3. Make it into a game. Hide some treats around the garden before you leave your puppy alone. This can help reduce boredom and separation anxiety.

4. Associate alone time with eating. If you've only got one puppy then you might be able to leave his food with him while he's alone. Only do this if you can keep an eye on him from indoors, don't leave your puppy alone with food if you're hading out for a while. Also be aware of other animals that may try to pick a fight or steal his food.

Jenna has been a pet lover all of her life. She is the proud owner of three cute dogs (Molly, Oscar and Dobby), and regularly fosters and cares for puppies that have fallen on hard times. She is currently studying Animal Sciences and has a special interest in animal behavior, welfare and grooming.

Why Is My Golden Retriever Always Seeking My Attention?

How To Get Your Poodle To Calm Down

Do German Shepherds Bond With One Person?

Do Golden Retrievers Get Jealous?

What Is A Dapple Dachshund? (A Complete Guide To The Dapple Doxie)