Yes, any dog can get kennel cough.

Even dogs that have been previously infected or vaccinated against kennel cough can still catch it.

Young puppies, older dogs with a compromised immune system and dogs that have not received the kennel cough vaccination are also at a greater risk.

Some breeds are also more susceptible to catching the disease because of the shape of their face and palettes. Flat-faced dogs such as the Boston Terrier, Boxer, Brussels Griffon,Bulldog, Bullmastiff and even the Chihuahua have excess tissue at the back of their mouthes that can make breathing more difficult. This makes it more difficult for them to clear their airways through coughing.

What is kennel cough?

Kennel cough (infectious tracheobronchitis) is a highly contagious upper respiratory canine disease that can be caused by a bacteria (Bordetella bronchiseptica)or a virus(canine parainfluenza).

If a dog has been exposed to one of these infectious microbes, it usually takes around a week for the first symptoms to appear. Kennel cough is a fairly mild disease in young, healthy dogs, similar to a cold in humans. It’s self limiting, and will usually runs its course within 10 to 14 days after symptoms first appear.

The unmistakable cough associated with kennel cough is caused by inflammation of the upper airway. The pathogens that cause the infection, settle in the lining of the respiratory tract leading to irritation and a cough.

Some dogs may need antibiotics or cough suppressants to help them to fight the infection. A vet will usually carry out an examination first to rule out other causes of the symptoms such as canine influenza or pneumonia.

How long does kennel cough last?

Kennel cough can last anywhere from 10 days to 2 weeks.

It all depends on the breed and overall health of the infected dog. Even after recovery and symptoms have eased, previously infected dogs can still pass on the disease to other dogs for a number of weeks.

If your dog has recently been in a place such as a boarding kennel or a grooming parlour,  where he may have been in close contact with other infected dogs, then it is highly likely that he will have contracted the disease.

Most dogs don’t show symptoms for a few days after exposure, so sometimes it can be difficult to pinpoint where the disease was picked up. Kennel cough is highly contagious and can be passed among dogs that share a water bowl or even a toy. 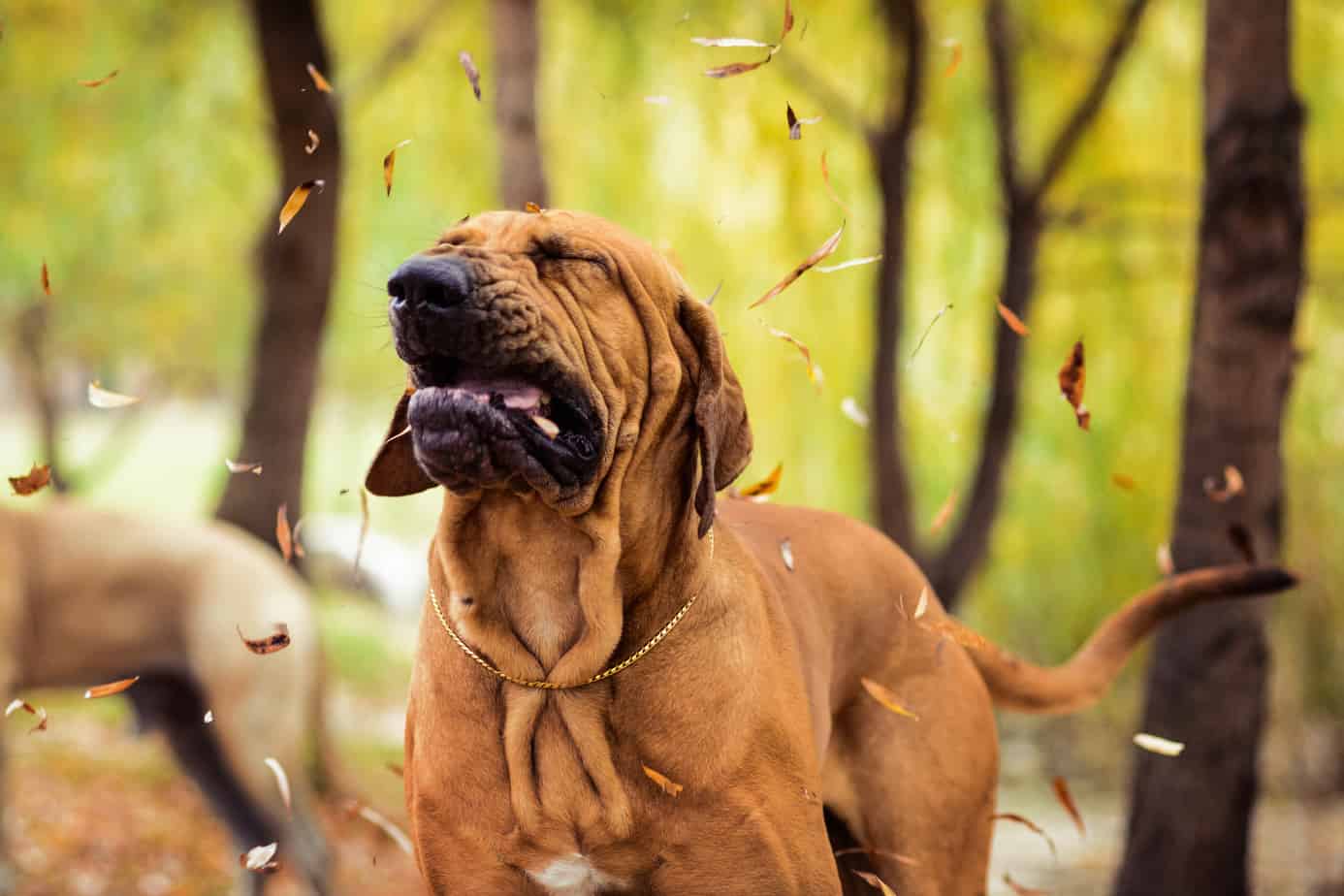 If your dog is older or has a compromised immune system, then the infection can last longer than 2 weeks and will need the care of a vet to get better.

This can also be the case with flat-faced, brachycephalic dog breeds.

This type of dog has an elongated pallet, narrowed nostrils and excess skin in their airways that can make it difficult to clear phlegm. Some dogs such as Bulldogs also have a narrow trachea that can cause further problems.

Can humans get kennel cough?

Kennel cough can be caused by one or more infectious agents.

Most of these agents do not infect humans. There have been some cases of Bordetella infection in humans, but the source of the infection is not clear.

Even if you were to visit your doctor with symptoms similar to kennel cough, it's unlikely you will be tested for kennel cough causing pathogens.

The Bordetella bacteria that leads to kennel cough can also infect other animals such as rabbits, guinea pigs, pigs and some cats.

It may be possible for a very sick individual with a weakened immune system to contract a disease from such animals. One such recorded case was of a man with HIV developing a form or penumonia caused by Bordetella bronchiseptica.

How is kennel cough spread?

Kennel cough can be spread in a number of ways: via the air, saliva or mucus of dogs and by dogs licking and coming into contact with each other.

It’s an airborne disease that is caused by pathogens that can live outside of a host for up to 2 weeks. This means that a dog doesn’t even have to come in contact with another infected dog directly to catch the disease.

The most common way that kernel cough is spread among dogs is via that air. Dogs that are in close contact with one another in places such as boarding kennels, vet waiting rooms, dog parks and grooming parlours can easily pick up the disease.

Because the infection causes coughing and sneezing, the bacteria (or virus) is expelled into the air where it can be inhaled by another dog.

Canine parainfluenza has been shown to remain infectious for between 4 to 12 days if the conditions are favourable. This means that the virus can live on surfaces of water bowls, toys, bedding, bones and other places that your dog may frequently come into contact with.

The Bordetella bacteria can live for around 48 hours outside of a host, so it too can be transmitted via toys or bowls too.

The name kennel cough comes from the most prevalent symptom associated with the infection, the cough.

Some dogs will develop a dry, hacking cough that sounds painful. It can be traumatising to listen to as it is usually persistent and sounds like the dog is in distress or discomfort. Sometimes the cough can sound like your dog is trying to cough up something that is stuck in his throat, a bit like a cat coughing up a fur ball!

Some dogs also cough through their noses in an effort to expel mucus. This can create a strange honking noise and excessive sneezing.

What are the signs and symptoms of kennel cough?

The first symptoms of kernel cough usually show up a few days after exposure to the disease. The most obvious symptom is the cough, and sometimes this is the only symptom. If the dog is young and healthy, then he will probably continue to eat, play and generally act normally while infected.

Sometimes the disease also causes a fever, tiredness or lethargy and discharges from the eyes, nose and mouth.

If you suspect your dog has caught kennel cough then it’s important that you bring him to the vet to get checked out, and to rule out other causes of the symptoms. Other causes of a dry cough can include parasite infections, lungworm, cancer and heart disease.

In some cases, kennel cough can present with a secondary infection. This is more common in older and weaker dogs, as their immune system is not as capable of fighting off more than one disease at a time.

Kennel cough can sometimes lead to more serious diseases such as pneumonia. If your dog stops eating, becomes overly lethargic or has trouble breathing, then get him to a vet immediately for treatment.

How is kennel cough treated?

Kennel cough will usually pass in two  to three weeks by itself.

If your dog is otherwise healthy, and is not displaying other more serious symptoms then no treatment is necessary. If the symptoms don’t ease, and the cough gets worse, then take your dog to a vet for treatment.

The best treatment for kennel cough is rest and plenty of clean water. You should also avoid using a tight collar as this can make the coughing worse.

In some cases a vet may prescribe antibiotics to fight the infection. Common drugs used to treat kennel cough include Baytril and Doxycycline. A cough suppressant may also be prescribed if the cough is particularly nasty.

Some dogs owners also like to use herbal remedies to help ease the symptoms. Some people believe that vitamin supplements such as vitamin C can help to prevent infection by supporting the immune system.

Echinachea has been proven to help treat upper respiratory infections in dogs. Manuka honey can help to ease symptoms and it’s antibacterial so it can help with the infection.

Licorice root, slippery elm and even garlic are also recommended holistic treatments used to treat kennel cough (and other diseases in dogs). Obviously, you need to take care when using these alternative medicines, as some can be harmful to your dogs health.

Can a dog catch kennel cough at home?

Yes, if your dog comes into contact with another infected (or recently infected) dog, then he will almost certainly catch kennel cough.

Even if you isolate an infected dog, it’s almost impossible to stop the spread of infection. Dogs like to lick things (including each other), and the bacteria and viruses that cause kennel cough can live for days on the surfaces around your home.

Can a vaccinated dog get kennel cough?

This is because there are lots of different variants of the Bordetella and parainfluenza pathogens. It’s the same as trying to vaccinate humans from catching the common cold, it’s impossible to do.

Can a dog get kennel cough more than once?

Yes, a dog can get kennel cough numerous times over the course of his life.

A dog’s immune system will usually fight off a kennel cough infection in a few weeks. But, this doesn’t stop him from contracting the disease again at a later stage. This is because kennel cough causing pathogens can vary and mutate over time.

Jenna has been a pet lover all of her life. She is the proud owner of three cute dogs (Molly, Oscar and Dobby), and regularly fosters and cares for puppies that have fallen on hard times. She is currently studying Animal Sciences and has a special interest in animal behavior, welfare and grooming.

Can Labradoodles Live Outside?

Why Do Dogs Sneeze When Excited?

How Long Can A Dog Go Without Eating?

A Guide To Salmon Oil For Dogs