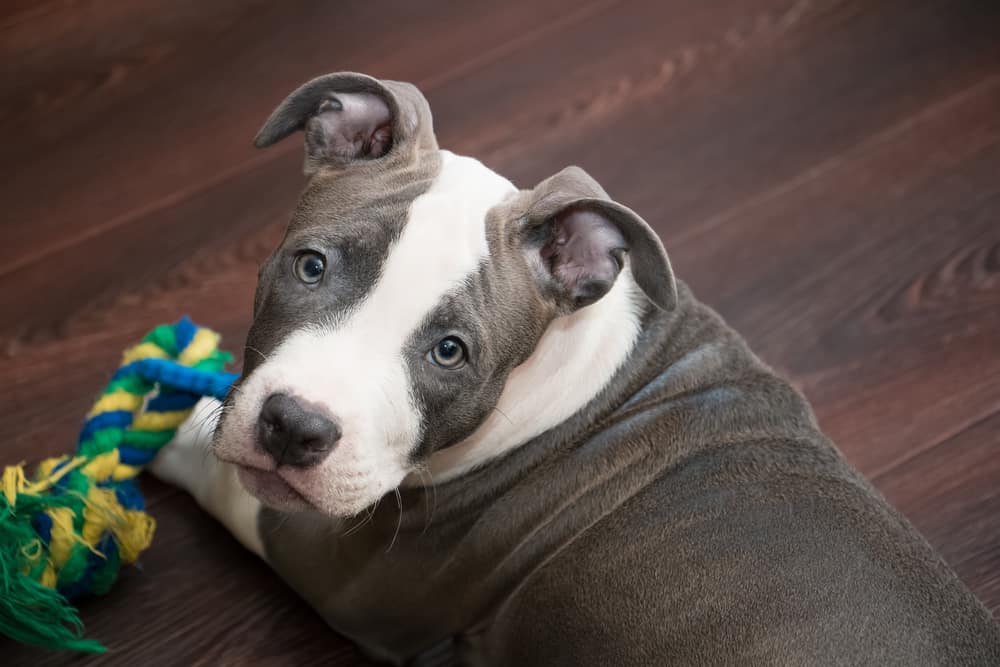 The Blue Nose Pitbull is a type of American Pitbull Terrier that has some unique physical appearance and coloring. They are not as prevalent as other pitbulls,  but are growing in popularity due to an increase in demand and inbreeding.

As a pitbull, they share all of the traits of the American Pitbull. They are strong and agile, with a genetic lineage that strongly links them to bulldogs and terriers. But like most dogs, if properly socialised and looked after, they make a great household pet that is loyal, active and great with all of the family.

Blue Nose Pitbull At A Glance 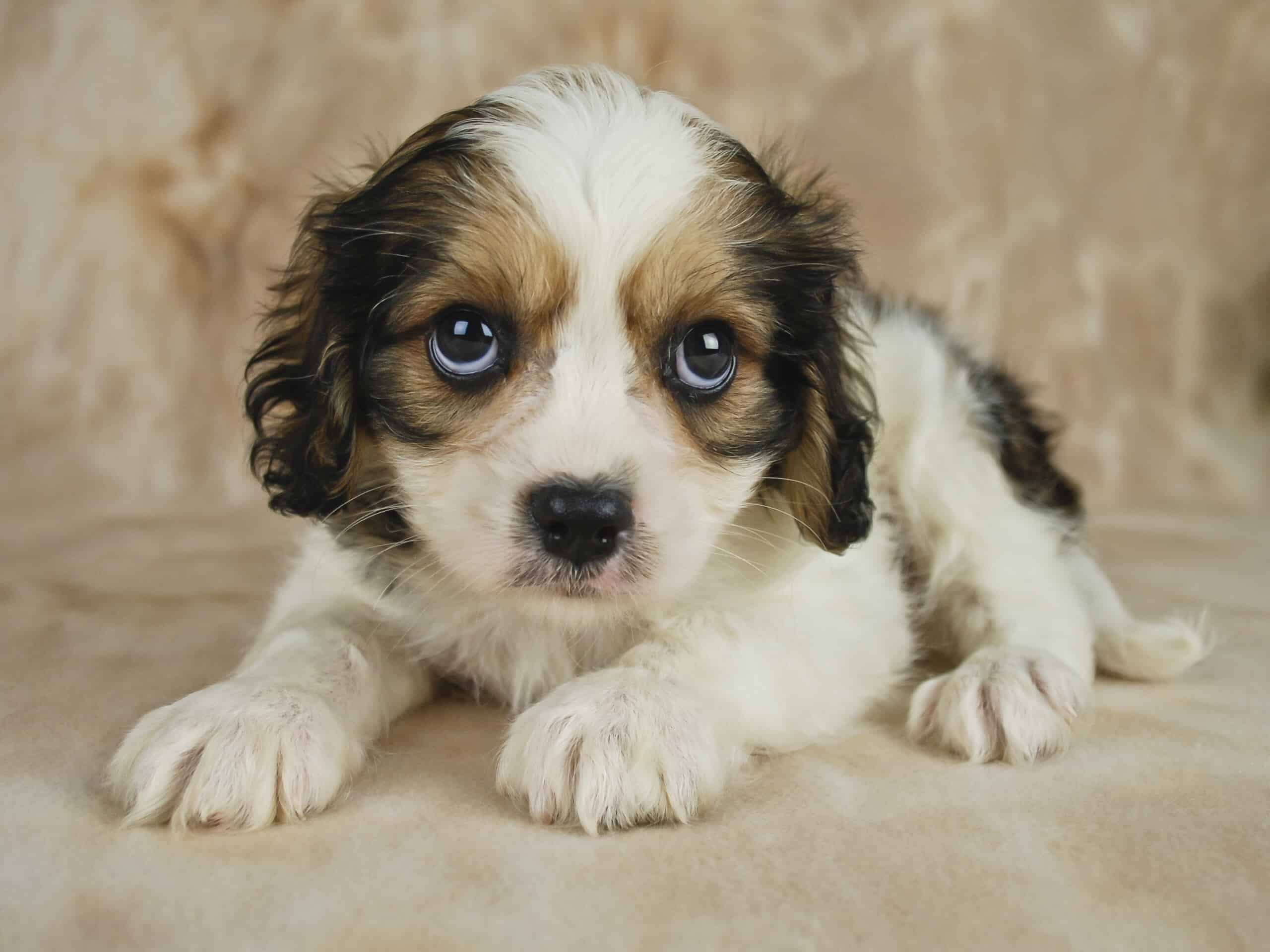 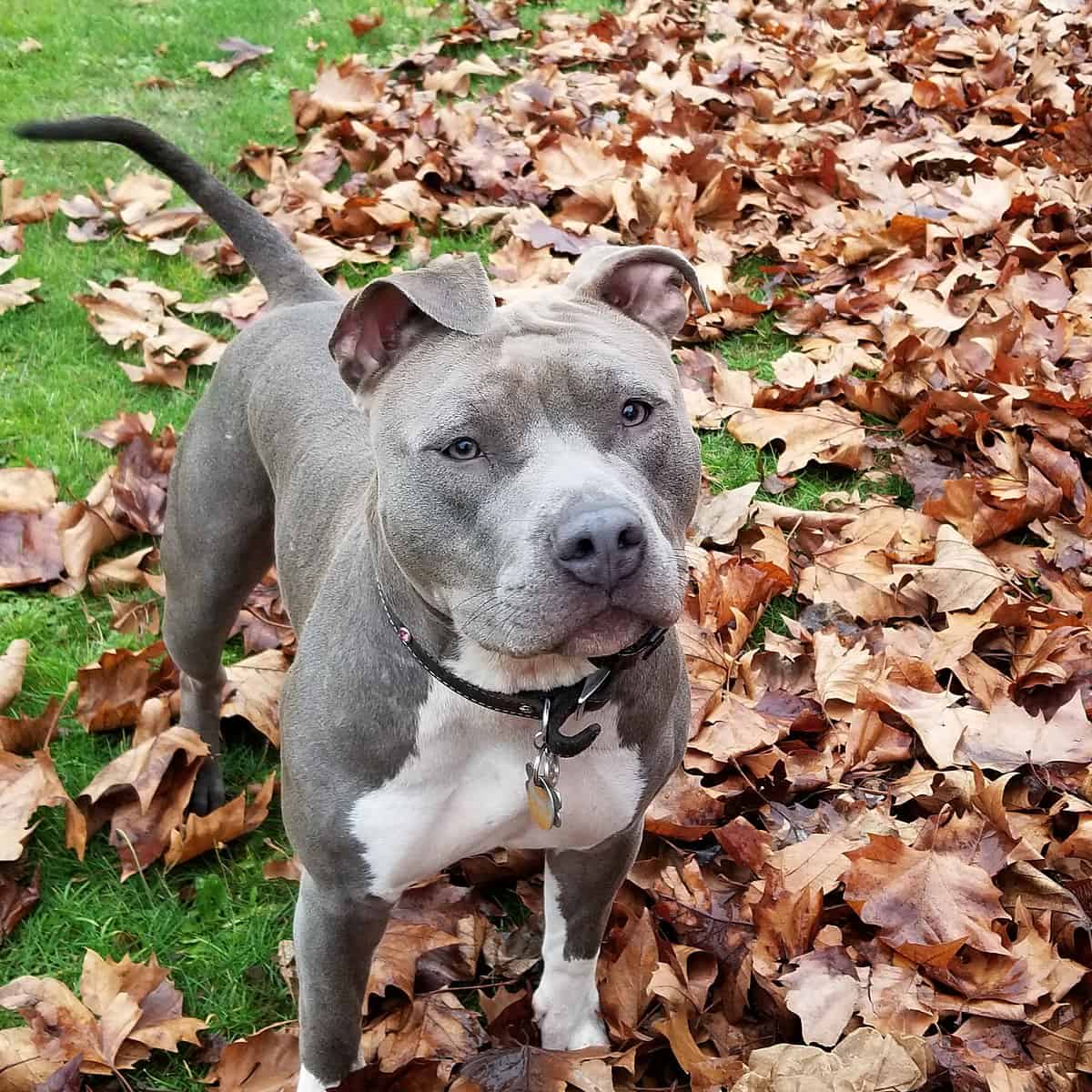 Where do Blue Nose Pitbull come from?

They get their name from the blue coloring on their nose. The coloring varies in size and is not always clearly visible. They also usually have a grey coat that distinguishes it from an American pitbull terrier.

How big does a blue nose pitbull get?

Pitbulls are a medium sized breed that are broad but short in stature, just like their ancestors the British bulldog.

The average male blue nose pitbull will grow to between 19 and 22 inches and the female will range from 17 to 20 inches.

They are stocky and muscular, and can be fairly heavy for their height. They can range in weight from 15 to 30 kgs, depending on their gender and their genetics.

If you live in a small apartment of single storey house, a blue nose pitbull may not be the best choice of pet. They are strong, agile dogs and can be destructive in enclosed areas.

Like most medium to large dogs, they need an outdoor area like a garden that they can run around in or somewhere to go when they need time to themselves.

If they are trained and socialised properly from when they are a puppy, you can be sure your Pitbull will be great around all of the family.

Because they grow up to be strong dogs with strong jaws, it’s very important that they are aware of boundaries and respond well to commands. As with any dog breed, teaching simple training commands such as sit, stay and wait will help your pitbull to learn self control and will help you to build a great relationship with  them.

They also benefit from living with other dogs of any breed. Dogs themselves love to copy and learn from each other, and through play they teach each other acceptable social boundaries. Blue nose pitbulls love the company of other dogs, especially if they are raised with them from birth. 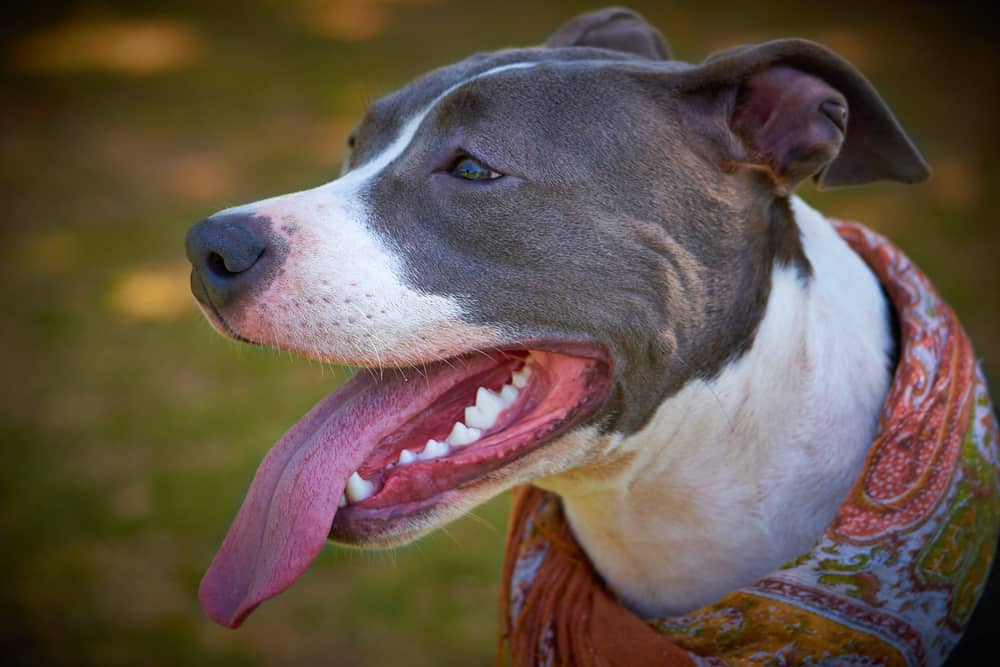 Pitbulls also love the company of humans, and can be very protective of their family and their home. They love playing, and are one of those breeds that retain puppy like characteristics well into adulthood. This makes them a great companion for children.

When it comes to protecting your house, they’ll bark at intruders just like any other dog. Out of the house, it’s important that they are kept on a lead and under your control as their boundless energy and love for affection can be interpreted as aggression by other dogs and people.

Unfortunately, many pitbulls are still bred for aggressive behaviour by reckless owners. Due to their size and strength this can make them more difficult to handle than smaller dogs. It also means that in many countries blue nose pitbulls are a restricted breed, and as such are banned from many public areas either completely or if they are not muzzled, micro chipped and on a lead.

Before you rescue or buy a blue nose Pitbull, you should check the law in your local area to see if there are any restrictions in place.

How much exercise does a blue nose pitbull need?

Blue nose pitbulls are not couch potatoes. Instead they love to get out and about and are great companions on long walks and hikes.

Just like any other medium sized dog, you’re going to have to exercise a blue nose pitbull daily. A good 30 to 40 minute walk is all that is needed to keep them happy.

For most dogs it’s more about the adventure and the mental stimulation, and it’s not just about burning off endless amounts of energy.

Pitbulls are clever dogs and they love to explore new places and sniff out new things. If you are an outdoor lover, then a Pitbull can make a perfect companion as they have lots of energy and can keep up with you wherever you decide to go.

They also love the water and because of their strong muscles are great swimmers. If you live near the sea or a lake, swimming can be a great way for them to burn off energy and cool down during the summer months.

Regular exercise is also important for blue nose Pitbulls to stop them from becoming over weight. Dog obesity is becoming a world wide problem and it can lead to all sorts of health problems.

Pitbulls can be susceptible to joint problems, and whilst this is often an unavoidable genetic disorder, regular exercise can help to keep your Pitbull in good shape and avoid any nasty health complications.

Yes, blue nose Pitbulls are really easy to train, especially if training is started at an early age.

Pitbulls also need regular mental stimulation to help keep them calm and happy. Like most dogs, they don’t like being by themselves for too long as this can lead to loneliness and boredom.

Blue nose Pitbulls love being trained and this is a great way to wear them out mentally. A well trained blue nose Pitbull will be much easier to live with, and will get on much better with everyone else in the household if he is well mannered and knows where the boundaries lie.

As a Pitbull owner, providing your dog with training and guidance is a key responsibility. All dogs are happier when they have boundaries, and blue nose Pitbulls are no different. They can be stubborn and mischievous at times, but are always willing to learn new commands.

Training is also a great way to build a strong bond with your dog. Pitbulls are people pleasers and love interacting with us humans. They are  attentive, quick learners that love receiving rewards for a job well done. Coupled with their love of food (as a reward), it is usually really easy to teach them the basics that will help them to coexist with you and other pets in a busy household.

Blue nose Pitbulls also love chewing. Their strong jaws make them excellent chewers so providing them with chew toys and bones can keep them happy for hours. They can also be used after training to help them relax and expend any leftover energy.

What does a blue nose pitbull eat and how much?

Pitbulls are lean muscular dogs that demand a healthy diet. Personally, I feed my own dogs a raw food diet of lean meat, bone and steamed vegetables. Blue nose Pitbulls are carnivores just like all other dogs, and will thrive on a raw food diet.

If raw meat is not your thing, then a good quality, grain and additive free food will also work. The amount of dry food a Pitbull will eat depends on the brand of food and the manufacturer recommendations.

Do blue nose pitbulls need to be groomed often?

Blue nose Pitbulls have a short, silky coat. They are a very low maintenance breed when it comes to grooming. Daily brushing and occasional baths are about as complicated as it gets.

It’s important to brush their coat daily to stimulate the production of naturally occurring oils in the coat that nourish and protect the hair. It also helps to remove dead skin cells and hair that can irritate the skin and cause itchiness.

Because of their short hair, Blue Nose Pitbulls are easy to keep clean and don’t need bathing too often.

They can sometimes suffer from dry or irritated skin, so it’s important to use a shampoo that has been developed for animal (not human) skin. Even the mildest human shampoos can contain chemicals that will just exasperate any existing skin conditions. In my experience, an oat based soap that is high in sulphur does the trick nicely.

Can blue nose pitbulls have any health problems?

Blue nose Pitbulls will sometimes suffer from the same health problems that occur in American Pitbulls.

This can mean that genetic problems are often passed onto the next generations due to the small gene pool.

The recessive gene that creates the grey coat and blue nose markings is not as common as its dominant counterpart in American Pitbulls. This means that breeders need to breed blue nose females with blue nose males to ensure the distinctive colouring is passed on to the next generation.

Unfortunately, other genetic traits are also passed on too. Some blue nose Pitbulls can suffer from deafness, cataracts and heart problems.

If you are considering getting a blue nose Pitpull, then I’d strongly advise you to meet the breeder at their home where you can see both parents of the puppy and get a better idea of any health problems that may exist in the family.

Or check your local dog rescue centre to see if they have any blue nose Pitbulls for adoption. Most rescue centres will have a vet onsite that can advise you of any problems the dog may have.

Just like any other dog breed, it depends on diet, genetics and quality of life. A well looked after Pitbull will usually live for at least 10 years, and some up to 15 years.

do blue nose pitbulls get along with other dogs?

Yes, all Pitbulls can get along with other dogs.

All Pitbulls can coexist with other dogs if they are born into this environment. There is a lot of misinformation out there about Pitbulls and their personalities. In truth, they are no different from any other dog breed (or any other animal). They can live in lots of different environments with people or other pets.

Every dog needs to learn from a young age how to cooperate with their owners and any other pets in the household.

Dogs are masters when it comes to socialising. They use their innate skills to manipulate us into giving them what they want. Healthy, happy dogs that have been raised properly and without abuse love living with other dogs, and blue nose Pitbulls are no different.

If you are bringing a rescue Pitbull or a Pitbull puppy into a household that already has one or more dogs living there, it’s important that you introduce them to each other on neutral ground, such as the local park. Let them sniff each other out and get comfortable with each other before bringing them home.

Just like with people, there is no guarantee that any two dogs will get along. You will always have a better chance of introducing a new dog to a household if it’s a puppy as they will have no baggage or bad training to overcome.

The same applies to dogs that meet other dogs in the park or when out for a walk. Whether they get along with other dogs they meet does not depend on the breed. Dogs sometimes just don’t like each other or may have an injury or socialisation issues that make them more nervous and likely to get aggressive.

PoochAuthority.com is a participant in the Amazon Services LLC Associates Program, an affiliate advertising program designed to provide a means for sites to earn advertising fees by advertising and linking to Amazon.com.